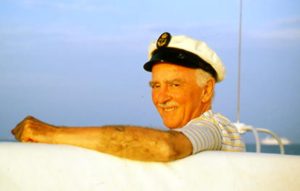 Antón Menchaca Careaga was born on 15 July 1921.His early vocation of the sea, influenced by his family, drove him to study at the Military Naval Schools in Cadiz and Marin, where he graduate as officer and then became corvette captain. Then, he studied Human studies at Oxford, and law in the Complutense University, in Madrid.

As he was a liberal, he was imprisoned in carabanchel, in 1957, where he met many other critics of the regime. This experience helped so much in shaping his rebellious personality. After being in carabanchel, he started his particular struggle for freedom, and in that way he founded “Cuadernos para el dialogo”, and collaborated in the creation of the newspaper called “El Pais”.

His interest in social and cultural issues led him to preside some societies such as, “nuevo Ateneo” or “El Sitio” (1985-1989) which he helped to be consolidated.

As an honest person committed to his time, he was always linked to editorial, local and cultural activities. In 1974 he created a Foundation in his father’s memory, whose main objective is to attend underprivileged groups of people.

As a writer, he wrote his works in an elegant prose-style: ten novels and seven essays. The social commitment that he had coved be seen in many of the opinion – columns that he published in different newspaper: El Pais, ABC, Deia, El Mundo… and in other that have already disappeared such as “Bilbao”, ”Hierro”, ”La Gaceta del Norte” and the cultural magazine “Arbola”.

If there was something that made Anton to be different when comparing his figure with other intellectuals of the time, is the fact that even if he was in a privileged position inside Franco’s dictatorship, he never let the social conditioning of the period to affect his personality. He tought against imposition, with the help of some people such as Enrique Tierno, Raul Morodo or Joaquin Ruiz Jimenez, he tried to reivindicate the European character of the European character of the country, using the “Plataform for the Liberties” to do that. Togheter, they tried to “open the windows” to let the air to enter and to make in that way the enviorement more breathable. It was the beginning of many of the changes that came later. It costed too much, and it was not easy.

They also paid their toll, they were sent to prison and for a long time they were snubbed, they even adquired a reputation for being traitors or lunatics (depending on whether the opinion came from the right wing or from the left one).

The fact is that these individuals contributed to make the system yield so that the transition would not become a traumatic and violent breaking. From their liberal ideology, they convinced other people that the future was the peacefull transformation of the country, that this would be done through respect and consideration.

There is too much work to be done for our society to be as perfect as Anton desired, but he left a very good example of perseverance, humanism and honesty for future generations.